It’s easy to tell when a franchise has lost its luster. Things begin to feel redundant and the themes start to lose subtlety. When The Purge was released in 2013, it created an interesting concept. What if all crime, even murder, was legal for one 12-hour period each year? The Purge: Anarchy and Election Year expanded upon that concept. But having milked that premise in a trilogy, not even a prequel can keep this series from starting to feel stale. 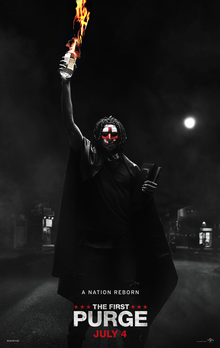 The First Purge takes place nearly a decade before the first film. With the aid of a psychoanalyst (Marisa Tomei), the radical government regime known as the New Founding Fathers of America decide to use Staten Island, New York for the first experimental purge. Once they realize more citizens are interested in partying rather than committing murder, the NFFA takes matters into their own hands by bringing in trained killers and white supremacists. Caught in the chaos are an activist (Lex Scott Davis) and her drug dealing brother (Joivan Wade), a single mother (Lauren Velez), and the island’s biggest kingpin (Y’lan Noel).

In case it wasn’t made clear earlier in this review, The First Purge is redundant and lacks any subtlety. There is virtually nothing in this film that will be considered refreshing or exciting to anyone who has seen any other Purge movie. We’ve already seen both skilled combatants and mere civilians stuck in the streets during the Purge in two other movies, so it adds no real intrigue here. The concept of the government masquerading as purgers as a means of population control has also been used before. So aside from gangster movie cliches, more creepy masks, and some fresh faces with decent acting chops, there’s absolutely nothing this movie has to add.

What makes matters worse is the ending. Y’Lan Noel’s character going full John Wick to save his friends from a pack of neo-Nazis in an apartment building, makes the film go from typical Purge movie to an outright ridiculous 90’s Jean-Claude Van Damme movie. If all the creators of this franchise can do is come up with different ways to get people out on the streets during the Purge, then it is definitely time to put it to rest before it gets any more unbearable.