It doesn’t matter who you are. High school is a whirlwind of angst and drama. Finding your individuality and navigating the awkward landscape of social interaction is something every American can identify with. This is why a well written teen comedy with endearing characters can be some of the most compelling cinema, and it’s why Love, Simon is one of the best films of 2018 so far. 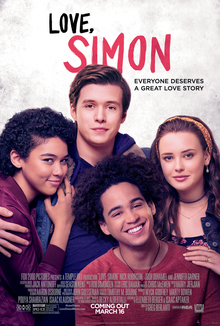 Simon (Nick Robinson) is a high school senior with loving, successful parents (Josh Duhamel and Jennifer Garner), a little sister who is an aspiring chef (Talitha Eliana Bateman), and a loyal circle of best friends (Katherine Langford, Alexandra Shipp, Jorge Lendeborg Jr.). He is also hiding his sexual orientation from all of them, afraid of how things might change if his peers know the truth. When an anonymous classmate posts on a blog that he too is gay and afraid to come out, Simon creates an alias and forms a romantic bond with the secret student via email. But after another, socially awkward, student (Logan Miller) stumbles upon his secret and threatens to blackmail him, Simon is forced to finally confront his frightening reality.

All great teen comedy/dramas have a main character that is charismatic and easy to route for. Love, Simon is no different. Nick Robinson’s emotionally earnest portrayal is absolutely magnetic. He brings quirky humor and tear jerking compassion that should make any person with an ounce of heart admire and gravitate toward his journey. The supporting players hold their weight as well. Each performance has depth that makes them feel real and not just characters in a story. Jennifer Garner and Jush Duhamel are specifically marvelous. The heartfelt scenes they share with their onscreen son after his inevitable coming out are nothing short of beautiful.

Love, Simon is the first major release that tackles such a pertinent subject matter and it explores its themes with sensational nuance. Robinson’s character does not exemplify many of the stereotypes associated with homosexuality which helps the film serve as education for viewers with misconceptions while also giving representation to an unfairly scrutinized community. It teaches us how to be tolerant and supportive of things we don’t identify with or understand. And even though it gets a little sappy, Love, Simon proves to be a transcendent love letter to everything that makes the genre emotionally captivating.