A Wrinkle in Time, published in 1962 by author Madeleine L’Engle, is one of the most beloved children’s novels ever written.  Who better to adapt this sci-fi fantasy for the big screen than Disney? The studio has decades of successful films that have dazzled young and old audiences. Tabbing Ava DuVernay (Selma) to direct an impressive cast of well-known actors and fresh faces, this adaptation had the ingredients to be something exciting and fun. 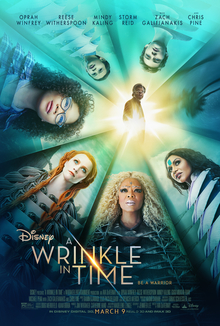 Newcomer Storm Reid plays 13-year-old Meg Murry, a feisty middle school loner who lives with her scientist mother (Gugu Mbatha-Raw) and her genius kid brother Charles Wallace Murry (Deric McCabe). Her father (Chris Pine) has been missing for four years, disappearing after working on a device known as the tesseract that could theoretically transport people through time and space. One day, Charles Wallace introduces her to three strange witches (Oprah Winfrey, Mindy Kaling, and Reese Witherspoon), who recruit Meg and her smitten classmate Calvin (Levi Miller) on a mission to rescue her father from darkness that is spreading throughout the universe.

Let’s start with what this film does well. Visually, the movie is absolutely stunning and works beautifully with 3D technology. From the costumes to the environments, this adaptation brings L’Engle’s fictional worlds to life like no other. The movie also strikes the right cord for any wide-eyed youngster, especially young girls who can relate to Meg’s journey to find her identity and embrace her own individuality.

But it’s hard for adults watching the film to not feel bored. The story feels almost too simplistic, with events happening so quickly that the entirety of the film could be explained in a few brief sentences. The first planet visited in the film seems to only be there to look pretty and there are only two real perilous moments, making it hard to fully categorize the movie as an adventure.

Not helping matters is the lightweight performances and cheesy dialogue. Zach Galifianakis is the perfect brand of quirky in a brief appearance and Reese Witherspoon brings wit to her role as snarky Mrs. Whatsit. But Mindy Kaling leaves a lot to be desired as the constantly quoting Mrs. Who. She recites her lines so awkwardly bland that it leaves her character void of any charm. Storm Reid is admirable in the lead role, but her younger counterparts don’t seem ready for such large screentime. As for Oprah, she basically plays herself, while the dialogue from Mbatha-Raw and many of the teachers in the movie comes off as wooden and unrealistic.

If you are the parent to young girls, by all means bring them out to enjoy this film. Several bad movies I saw as a kid were some of my favorites, so younger viewers likely won’t be bothered by the film’s flaws. But if I were to recruit someone like Maya Angelou to write a children’s story, I’d expect some nuance to her tale that would make it enlightening for people of all ages. With such an impressive cast, and such an intelligent director, it just feels like this product is shallow and rushed.  Comparing it to book adaptations like The Lion, The Witch, and The Wardrobe, this version of A Wrinkle in Time may be nice and wholesome, but it skimps on intrigue and is relatively forgettable as a narrative.