Alex Garland emerged in a big way with 2014’s Ex_Machina. His directorial debut showed that he had the chops to make an intense science fiction thriller without big, bloated CGI effects. In his much anticipated follow up, Garland brings in an impressive cast to take on Jeff VanderMeer’s bestselling novel, Annihilation. 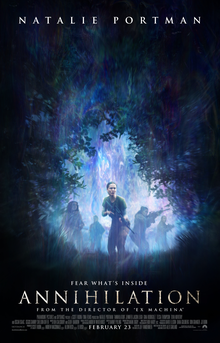 Natalie Portman stars as Lena, a former soldier turned university professor of microbiology whose husband (Oscar Isaac) has been missing for a year. When he mysteriously returns from a secret special ops mission, she discovers that he isn’t the same. Whisked away by a government agency, Lena discovers that her husband is the only person to return from an eerie glowing mass that is spreading along the western seaboard. Determined to understand her husband’s mission, Lena joins a team of scientists (Jennifer Jason Leigh, Tessa Thompson, Gina Rodriguez, Tuva Novotny) to explore the mass and uncover its interplanetary origins.

Steeped in stunning visual effects and eerie cinematography, Annihilation absolutely works as a tense thriller. Inside the mass, where the normal laws of nature have been twisted, the crew’s journey plays out like an intensely violent horror that tests the psyches of all who enter. Each member of the cast holds their own and adds depth to their damaged characters.

Things stumble a bit in the narrative, where flashbacks are interwoven into the story to dive into Lena’s past. The scenes add to her character motivations, but can often undermine the anxious tone. The non-linear style of storytelling also gives away early on that no one makes it out alive except for Lena, which somewhat kills some of the suspense. The ending also gets a bit weird if you’re not quite prepared for the truly bizarre, but overall Annihilation succeeds in being a more exciting version of Ridley Scott’s Prometheus films.