September isn’t exactly a month that begets movie going. It’s pretty much the month where everyone focuses on the beginning of football season. But if you’re willing to search for a gem, there is always some lower budget film with a solid cast that can catch your eye and hold your attention. For September 2017, that movie is Ingrid Goes West. 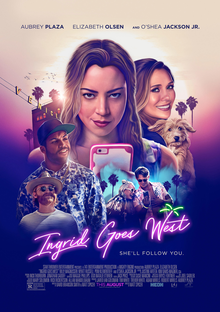 Aubrey Plaza, who produced the film, stars as Ingrid, a neurotic millennial fresh out of a mental institution after pepper spraying a presumed friend who failed to invite her to her wedding. When she inherits thousands of dollars from her deceased mother, Ingrid decides to move to California for a fresh start. There she begins stalking an Instagram socialite named Taylor (Elizabeth Olsen) with a seemingly perfect life. But after entering Taylor’s circle, Taylor’s tool of a brother (Billy Magnussen) threatens to unearth Ingrid’s unhinged ways and ruin her newfound friendship.

Nearly all of the characters in this black comedy are hard to find favorable. Ingrid is despondent, creepy, and willing to go through anything to be likable no matter how self-destructive. Olsen’s Taylor and her Californian friends and family are all either insufferably shallow or grotesquely pretentious. But the performances are the driving force that help prove the film’s point. Plaza’s grounded portrayal as the mentally unstable Ingrid feels tragically real in today’s social media obsessed society that places influence on appearances.

The heart and soul of the film ends up being the surprising romance between Ingrid and her Batman obsessed land lord (O’Shea Jackson Jr.). Jackson Jr., in his first major role since Straight Outta Compton, has organic chemistry in every scene with Plaza. The two characters unexpectedly coming to love and understand one another is what pushes this film to being enjoyable and not just an uncomfortable testament to our own society’s scary narcissism.