Pixar and Dreamworks aren’t the only ones who can make great animated films. When Despicable Me first arrived in 2010, it became a surprise hit thanks to its endearing family story that molded seamlessly with a brand of Looney Tunes-like slapstick humor. But after a solid 2013 follow up film, the animators at Illumination tested their luck by making a Minions spinoff that fell flat. With Despicable Me 3, there is a need to rekindle the old magic to avoid the franchise from becoming stale. 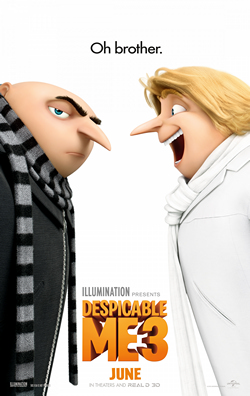 If Minions almost made you forget just how great the Despicable Me stories are, Despicable Me 3 thankfully has several moments that are a pleasant reminder. The family dynamic is once again wonderfully charming and the laughs are plentiful. The biggest flaw is in the addition of the wholly unnecessary and often annoying character of Dru, but by the end even he manages to fit into the dynamic without feeling out of place. As for the minions, they are thankfully back where they belong as the comedic sideshow where most of them are involved in a plot that requires them to break out of prison.

Like the villains in the previous films, Trey Parker’s Balthazar Bratt is meant to be less of an in depth character and more of just a comedic caricature. And what a caricature he is. Dancing to Michael Jackson’s ‘Bad’ while doing the “running man”, the character provides some good laughs even if you could care less about why he exists. Despicable Me 3, unlike the Minions spinoff, has a better understanding of what works best in the franchise and even if the story isn’t quite as memorable as parts 1 and 2, it manages to still be a wholesome and funny family adventure.

C = Not Bad, but highly flawed/Worthy of a Redbox