Fast and the Furious can be an acquired taste, but if there’s something we can all agree on, it’s that fast cars are entertaining as hell. Edgar Wright, the man behind Shaun of the Dead and Scott Pilgrim vs. The World, seems to have grasped that concept pretty well and manufactured it into a sleek heist film. In this summer filled with sequels, adaptations, and reboots, Wright refreshingly injects a film with exhilarating summer action, a great cast, and some catchy tunes. 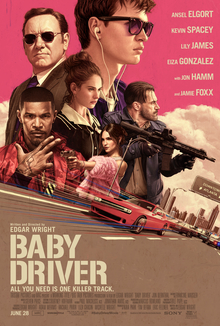 Baby Driver stars Ansel Elgort as Baby, a skilled getaway driver who uses music to drown out a condition leftover from an accident that killed his parents. After falling for a diner waitress named Debora (Lily James), Baby desires a life free of car chases and shootouts. But to gain his freedom, he’ll have to outsmart his blackmailing boss Doc (Kevin Spacey), and his collection of loose cannon associates Bats (Jamie Foxx), Buddy (Jon Hamm,) and Darling (Eiza Gonzalez).

Everything about Baby Driver is stylish and fun. The action sequences, which the film wastes no time getting into, are ridiculously exhilarating thanks to some jaw dropping stunt work. The music is an eclectic, but fitting mix of rock n’ roll and hip hop songs blended from different eras. Perhaps the most captivating, is how Wright incorporates the music into his cinematography, often synchronizing beats with the swift movements onscreen.

But while it can be entertaining, a movie can’t be truly great off of action, music, and cinematography alone. Wright’s story is well crafted and endearing. Though the characters seem simple, the charm of Elgort and Lily James helps us buy into the starry eyed romance between Baby and Debora. Meanwhile, Foxx, Hamm, Gonzalez, and even Jon Bernthal in a small role, all do their best to steal each scene they’re in as the wickedly charismatic band of degenerate thieves. Kevin Spacey effectively makes it all come together with his slick portrayal of the group’s ring leader.

Baby Driver moves at a pace that is swift but never difficult to follow. If you aren’t hooked by the opening scene, then this simply isn’t for you. As for me, I found it to be the most exciting thrill ride of the summer and maybe of 2017.