Disney’s 1991 animated Beauty and the Beast is in the pantheon of classic animated films along with the likes of Aladdin and Lion King. As such, it isn’t really a story that begs retelling. But Disney has already proven that it can turn its animated properties into worthwhile live action films with 2014’s Cinderella and last year’s Jungle Book. With a star studded cast and a bit of CGI magic, director Bill Condon (Dreamgirls) looks to make Beauty and the Beast into a refreshing take for a new generation. 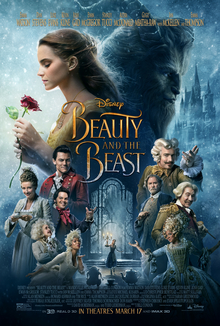 In case you’ve lived under a rock and don’t know the story: Beauty and the Beast is the tale of a shallow prince (Dan Stevens) who is turned into a beast by a sorceress and his servants all turned into objects. Only the affection of someone who recognizes his inner beauty can end their curse. Emma Watson stars as Belle, the humble daughter of a widowed craftsman (Kevin Kline) who defies the norms of 18th century French girls by reading in her spare time and has the unwanted affection of a pompous soldier named Gaston (Luke Evans). When her father is kidnapped by the beast, Belle takes his place as the Beast’s prisoner.

Jokes of Stockholm syndrome aside, Beauty and the Beast, while dated, is an enchanting story with a valuable lesson that life is happier when you aren’t an a-hole. The animated version was full of charm and the impressive cast does a solid job carrying the torch. Ewan McGregor and Ian McKellen have fun, effective chemistry as Lumiere the talking candle and Cogsworth the talking clock. And while she isn’t quite Angela Lansbury, Emma Thompson manages to bring a similar wholesome vibe to the role of Mrs. Potts the talking teapot. Several of the characters even have a bit more weight than they did in the animated version. Josh Gad, bringing a solid dose of bumbling comic relief as Gaston’s flamboyant sidekick Lefou, is a perfect example of this.

Because no one in the cast drops the ball in their roles, the film succeeds in bringing a bright burst of nostalgia to anyone who is a fan of the 1991 version. If only they could sing as well, because the music is essentially the same and all of the songs are back but noticeably underperformed. A few new songs are also added, some welcomed, and some that feel completely unnecessary which becomes a trend for the entire narrative. While some of the changes from the animated version add depth to the story and characters, many of the additions and changed scenes serve little to no purpose and make the movie drag a bit.

Visually the movie is also a bit inconsistent. Look no further than the Beast and the enchanted objects, who at times look strikingly real and at other times look clunky and underdeveloped. The gorgeous scenery, costumes and set pieces, however, don’t disappoint and bring an added dose of French culture that pay homage to the era better than any animated film ever could.

As a musical, the vocals all being a noticeable step downward is a bit of a crutch that is hard to overcome when you’re attempting to remake a beloved classic. With an updated narrative that is more in depth but also more cluttered, it’s difficult to consider this version better, as good, or even inherently necessary aside from a pleasant dose of diversity to its cast. Beauty and the Beast ends up being a fun trip down memory lane that is at times visually captivating, but if you’re looking for the definitive version of this classic fairy tale, look up the 1991 version.

One thought on “Beauty and the Beast (Full Review)”