No film director in history has ever put a scowl on my face quite like M. Night Shyamalan. He started off his career with such promise with films like The Sixth Sense and Unbreakable. But then, somewhere along the way, his signature plot twists got dumber and dumber (Signs, The Village, The Happening) and his narratives got more and more boring (Lady in the Water, After Earth). The less said about what he did to The Last Airbender, the better. But like a jump shooter who can’t seem to make an open shot, maybe Shyamalan just needs one to hit the mark and he’ll be back on the right track. 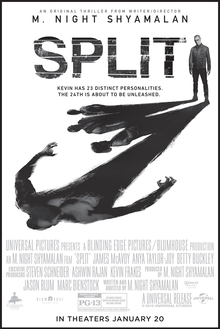 His newest attempt, Split, stars James McAvoy as Kevin, a man with multiple personality disorder who abducts a high school loner (Anya Taylor-Joy) and two naïve, but considerate popular girls (Haley Lu Richardson, Jessica Sula). As one of his personalities attempts to reach out for help from his psychiatrist (Betty Buckley), Kevin’s more dominant personalities: a woman, a stoic pervert, and a 9-year old boy, hold the girls captive believing they will be a sacrifice for a fabled new superhuman persona known as ‘The Beast’.

The plot can get pretty out there at times, especially in the climax. But for most of the film things feel relatively grounded in reality. McAvoy’s performance, in particular, is sensational and his ability to encapsulate the different personalities is what makes this movie feel so effortlessly enthralling. Through the different characters within Kevin, McAvoy is able to invoke many emotions from humor, to endearment, to pure terror.

For one actor to manage this is truly impressive. In the final act, things delve into the more supernatural and overtly impossible which takes the film from a frightening thriller to a flat out slasher/monster film. But considering Shyamalan’s history of creating some overtly unexpected  and unwarranted plot twist simply for the sake of it, it is actually refreshing for him to keep things relatively straight forward.

There is a plot twist, however; one that will likely go over the head of many audience members. And although it has next to nothing to do with the film’s actual narrative, it is an undeniably unique element that could create a full on rebirth in Shyamalan’s career as an A-list filmmaker going forward. So, there you have it. No matter how many times you miss, making the next one hit its mark is all that really matters.

C = Not Bad, but highly flawed/Probably better off waiting for Redbox

One thought on “Split (Full Review)”