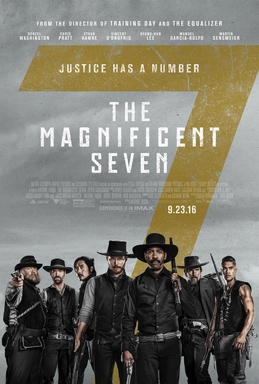 The western, or “Shoot ‘em ups” as my grandfather calls them, was once America’s most popular and profitable movie genre. But after the days of John Wayne and Clint Eastwood, America moved on to science fiction and buddy cop movies, leaving the old west behind. Now, even the best westerns get little love. So, here comes Denzel Washington to the rescue along with Director Antoine Fuqua (Training Day, The Equalizer) to try and revitalize the genre with a remake of The Magnificent Seven.

The original Magnificent Seven (1960) is itself an old west retelling of a (superior) Japanese film called The Seven Samurai. Both tell the story of a group of seven outlaws who band together to defend a small town from bandits. This new film carries the same premise with Denzel stepping into the lead role as a bounty hunter recruited by a widow (Haley Bennett) to save her town from a wealthy land thief (Peter Sarsgard). Rounding out the seven cowboys are a snarky gambler (Chris Pratt), a former soldier (Ethan Hawke) and his assassin friend (Byung-Hun Lee), a Mexican fugitive (Manuel Garcia-Rulfo), a Comanche warrior (Martin Sensmeier), and a comedic old timer with a proclivity for chucking axes (Vincent D’Onofrio).

The premise was fresh to audiences in the 1960’s, but here it feels cliché from the pacing to the characters. The dialogue, the camera work, and even the gunslinging all ends up feeling like a generic western. The often cartoonish nature of a few scenes make the overall product seem like a summer blockbuster version of something meant to be a little bit more thought provoking (see the Japanese original).

But there is certainly some enjoyment to be had. As always, Denzel Washington commands every scene he’s in. Chris Pratt, through a relatively weak cowboy accent, does provide a few laughs even though his character is just an 1800’s version of Star Lord. And overall the camaraderie of the seven men is felt even if it is rushed through. As for the loud, often over the top and formulaic action, it’s hard to not find it entertaining. So even if Magnificent Seven isn’t fresh or memorable like Quentin Tarentino’s Hateful Eight, it is a relatively fun two hour romp filled with the guns, explosions and bravado that make the genre worth watching.