Remember Jaws? Well, if you were born after 1985 then probably not. Sure, you remember the general premise and the iconic theme music, but everything else is probably a blur to anyone in my generation. So it only makes sense to make a similar film with a relatively scaled back budget that has the same goal of making audiences afraid to go in the water. 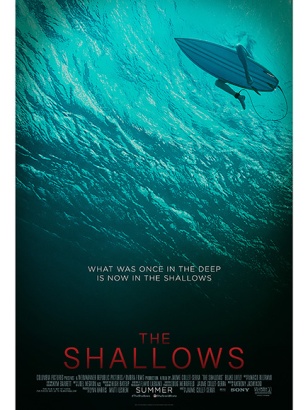 The Shallows stars Blake Lively as surfer and nursing school dropout, Nancy Adams. After her mother succumbs to cancer, Nancy ventures to a secret beach where her mother once vacationed. There she encounters beautiful scenery, perfect waves, a pair of friendly fellow surfers, and the smartest shark imaginable. After being bitten, she becomes stranded on a small rock, clinging to life as the shark waits for an opportunity to finish her off.

The simple nature of the film is one of the best things it has going for it. You can basically count the characters on one hand and the movie is over after an hour and a half. Essentially, you get what you come to see: Blake Lively vs. a man-eating shark. The suspense comes in solid enough doses to always keep you interested and Lively does a decent job making you care about her character, which is important considering she is rarely, if ever, not on screen.

But check your notions of common sense and realism at the door. The shark goes from vicious, instinctive predator to Jason Vorhees with fins pretty quickly. Then there’s the glaring plot hole early on in the movie that has Nancy being bitten by the shark in the leg, but managing to swim away. How did she swim away when no one else could? Don’t think about it. Better yet… how did the shark not bite her leg clean off when it chops a burly man in half later in the movie?

But The Shallows isn’t a documentary during Shark Week. It’s meant for 90 minutes of B movie suspense and a few cheap laughs just like any slasher film. If you turn your brain off and just watch, then the movie is effective. And no matter how nonsensical it gets at times, it’s hard to consider a movie this simple and straight forward disappointing.