If you’re like me, the only big screen memory you have of Tarzan is the 1999 Disney animated film. So, unlike the majority of Hollywood’s remakes and reboots, it actually seems like the right time to make a live action film about the man raised by Apes in the jungles of Africa. With David Yates (Director of the last 4 Harry Potter films) at the helm and Rise of the Planet of the Apes-style technology at his disposal, the elements are there for Legend of Tarzan to at least be a viable summer adventure. 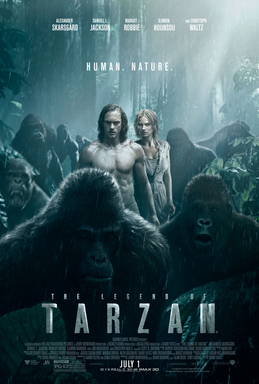 The Legend of Tarzan begins with Tarzan (Alexander Skarsgard) now going by his birth name, John Clayton, and living happily with Jane (Margot Robbie) in his late parents’ London estate. While there are flashbacks shown to give the character’s origins, this movie is not an origin story. It probably should’ve been though, because the plot is ridiculously too complex for its own good. And it’s noticeable pretty early on.

Sure, some are familiar with the Tarzan story, but that doesn’t mean it can’t be retold or re-imagined. Instead of getting a simpler story that focuses more on the characters and Tarzan’s growth and inner struggle to find his identity, we get a bunch of flashbacks that often disrupt pacing. The actual plot involves Belgium’s occupation of the Congo and a corrupt Belgian captain (Christoph Waltz) attempting to trade Tarzan to a rival African tribal leader (Djimon Hounsou) in exchange for access to diamond mines. And none of it works. The drawn out set up makes the first half hour a bore and when the set up of a movie is dull, what reason is there to care about the rest of it?

It would be nice if the action were a saving grace. But the CGI is noticeably not as strong as anticipated and several of the battles make no physical sense. Sure, being raised by apes makes Tarzan strong and his reflexes elevated but no human being would be able to survive a vicious thrashing to the spine by a full grown gorilla let alone be able to stand and fight shortly after.

Samuel L. Jackson brings welcomed humor and fun to the film as George Washington Williams, a real life African American journalist who penned a letter to Belgian’s King regarding the inhumane treatment of the tribal natives. And for what it’s worth, none of the other performances are bad. But an overly complicated plot coupled with a poorly put together narrative and clunky action makes The Legend of Tarzan feel like one big, forgettable attempt at something that could’ve been really good.