Despite having a unique premise, the first Purge movie did little to establish itself as anything more than a more gruesome reboot of Panic Room. But 2014’s Purge: Anarchy made the necessary improvements to make the series standout, mainly by expanding the characters and scope while also hammering home the underlying political allegory. The Purge: Election Year seeks to continue that good fortune and keep this popular film franchise from falling back into the mediocre doldrums of most modern day films in the horror genre. 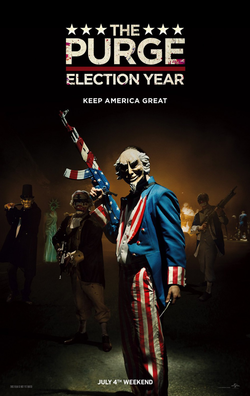 You don’t have to see the previous Purge movies to get what’s going on. In the near future, America has an annual twelve hour period known as the Purge, where all crime including murder is legal. The horrendous act is sanctioned by a government ran by elitists known as the New Founding Fathers. In Purge: Election Year a senator (Elizabeth Mitchell), whose family was murdered during the Purge when she was a teen, is threatening to win the upcoming Presidential election and end the violent practice. This obviously makes her the target of the New Founding Fathers, and they set out to eliminate her during the Purge. Her only protection is her bodyguard (Frank Grillo reprising his role from Anarchy), and a few everyday citizens.

There is plenty to like about this movie if you’re in to the action-horror genre. The action is intense and anything but boring and most of the characters involved are likeable even if they are relatively generic. There is no greater example of this than Mykelti Williamson’s performance as store clerk, Joe Dixon. The entire character’s arc follows a wholly predictable pattern, but the endearing performance makes every cliché line feel genuine and humorous more times than not. The likability of the characters is just barely enough to get through some of the more cartoony moments of the movie.

The biggest problem with The Purge: Election Year is that it just isn’t different enough from Anarchy. Once again, a skilled battle weary character has to navigate through violent streets with the aid of every day citizens. Even the ending feels too familiar to the previous film. The too often over-the-top moments make it feel a bit less authentic than the previous installments as well. But while the leap in quality doesn’t match the gap between Purge 1 & 2, there’s enough here to be entertained. And it’s also worth noting that the inevitable sequel has a half-decent set up.