Unless you were smart enough to watch The Nice Guys this past weekend, or were catching Captain America: Civil War for the fifth time, you might not have had the best weekend at the movies. I had the unfortunate experience of catching a double feature of disappointments. But that’s why I’m here: To experience the hour and a half letdowns so you don’t have to! 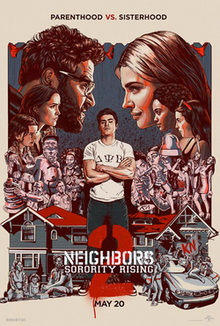 NEIGHBORS 2: SORORITY RISING The first Neighbors film (2014), about a couple (Seth Rogen and Rosy Byrne) and their newborn baby being tormented by a relentlessly partying fraternity next door, was pretty decent enough. My biggest gripe was that the film’s funniest moments were given away in the trailers, but Zac Efron and Dave Franco provided enough laughs to make the movie worth seeing at least once. Now comes the inevitable sequel, which finds the couple a few years later, expecting another child and preparing to sell their house. The only problem is that a new partying sorority is moving in next door. Now the couple must team up with Efron in a prank war to rid themselves of their new female adversaries (Chloe Grace Moretz, Kiersey Clemons, Beanie Feldstein) in 30 days before the new home buyers back out.

I had high hopes for this film, mainly because the trailers were full of laughs. Unfortunately, like its predecessor, the funniest moments like Chloe Graze Moretz trying to run away with a phone she thinks is cordless, are all in the trailers. Zac Efron along with cameos from Dave Franco and the rest of the main Delta Psi frat members from the previous film provide some welcomed humor, but otherwise the movie is a massive step backwards. For one, the sorority members aren’t remotely funny and despite a feminist context to their existence, they’re not that likable either. Some of the gags work (such as the air bag scene which is funnier than the one in the first movie), but there’s also a ton of gross out jokes that are unpleasant even for those with the most immature senses of humor. The plot also fumbles over itself from the start. In the first film, Efron and company were mostly college seniors so a noise complaint was the best a call to the police could warrant. But this time around, the antagonists are minors who nightly engage in underage drinking and drug conception, making all of this seem absolutely unnecessary even if it is a comedy. FINAL GRADE: C- 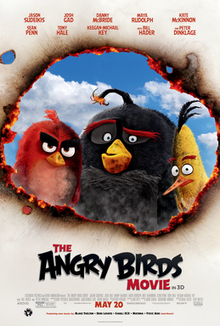 ANGRY BIRDS In a world where Emoji’s and Play-Doh are getting their own feature length films (it’s true, Google it), it isn’t in the least bit surprising that a popular cell phone game could get the animated kids movie treatment. Somehow, a game where tiny, flightless birds are fired via slingshot into structures created by green pigs is good enough source material for an hour and a half movie. Thus, we get the story of Red (Jason Sudeikis), an angry loner who teams up with his anger management classmates Bomb (Danny McBride) and Chuck (Josh Gad) to stop a Pig King (Bill Hader) and his minions from stealing all of the eggs from their bird village.

Despite its ridiculous premise, the movie lends itself to at least some form of success. Lessons about acceptance and friendship are decent takeaways for all of the little ones who may be watching this movie. The action in the final portion of the movie that harkens back to the video game, also looks good in 3D. But everything else about the film, from its relatively flat sight gags and slapstick humor to the overly kinetic plot, is an absolute mess. The story flows like a concept being pitched by an imaginative 4th grader who’s making it all up as he’s playing the game for the first time. Characters have inexplicable superpowers and random motives, and even the film’s principal conflict seemingly takes forever to actually manifest. There is so much good content available for kids these days, so a movie with a goofy premise, manic flow, and weak comedy is something anyone older than 7 years old might want to skip out on.