Divergent was, by no means, a groundbreaking achievement in film. But, I at least felt entertained despite its sloppy plot and meager production value. Last year’s sequel, Insurgent, managed to up the ante on the special effects front, but its plot was twice as incoherent as its predecessors’. So after a proverbial dud of a sequel, this young adult book trilogy turned film series has nowhere to go but up. Or so it seemed. 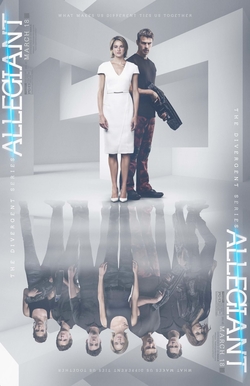 Allegiant picks up where Insurgent left off. With the faction system now toppled, Divergent hero, Tris (Shailene Woodley), tough guy boyfriend, Four (Theo James) and their friends are now desperate to leave ruined Chicago and to explore the unknown world that lies beyond the massive wall that surrounds the city. With Four’s mother (Naomi Watts) desperate to cease power, Tris and company decide to stage a daring (and rather dumb) plan to sneak out. Once beyond the wall, they discover the technologically advanced world responsible for their city and must convince its bureaucratic leader (Jeff Daniels) to prevent Chicago from tearing itself apart.

As far as plot’s go, this film is much easier to follow than Insurgent, but newcomers will still be totally lost if they haven’t brushed up on the first two films. And, unlike with the previous installment, there is actually a story that furthers the development of characters and the overall tone and message of the series. The problem is, the execution is virtually nonexistent.

I haven’t read the books, so I can’t tell if the script or source material is responsible for doing such a poor job of structuring what should be a decent story. Some characters are underutilized or killed off before you can even remember what purpose they served. Then there are the primary antagonists, who are either flat out dumb or spend the entire movie making unintelligent decisions that contradict how intelligent they are supposed to be. We’re supposed to believe Jeff Daniels’ villain, David, has been watching Tris and knows everything about her, and yet his overall plan involves hoping this rebellious teen conforms and doesn’t ask the simplest of questions? And he isn’t the only character that does dumb things. Through two previous films we’ve learned that Miles Teller’s character, Peter, is a double crossing sleaze, and yet at every turn the protagonists seem to go out of their way to ignore this fact and land everyone in deeper trouble because of it.

Allegiant isn’t quite as droll as Insurgent, but it is bad for entirely new, avoidable reasons. It doesn’t help that the film feels the impact of Insurgent’s financial flop. Shoddy CGI and a few segments of noticeable green screen make the movie look cringe worthy in certain spots. So, if you’re looking for a poorly rendered, poorly executed young adult science fiction movie to sit through until Batman v Superman drops, look no further. Otherwise, save your money and wait a few days.

One thought on “The Divergent Series: Allegiant (Full Review)”