2008’s Cloverfield is a bit of a polarizing film. Some found the filmmaking style nauseating and the story underwhelming after the massive build up. Others thought the movie was a creatively intense thriller. Regardless of how you felt about J.J. Abrams’ monster feature, you can throw all memories of it out of your brain for 10 Cloverfield Lane, because aside from a mysterious marketing campaign and a few tiny easter eggs embedded for purists, the two have almost nothing in common. 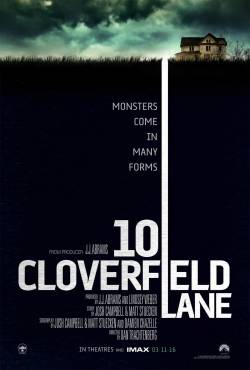 10 Cloverfield Lane, produced by J.J. Abrams and directed by feature film newcomer Dan Trachtenberg, stars Mary Elizabeth Winstead as Michele, a girl who gets into a car accident after getting into a fight with her boyfriend on the same night as an apparent attack on U.S. soil. When she regains consciousness, she has seemingly been taken hostage by Howard (John Goodman), a conspiracy theorist who believes aliens have attacked. Howard refuses to let Michelle and his stowaway neighbor, Emmett (John Gallagher Jr.), leave the bunker for fear of nuclear exposure, but the longer they’re down there, the more they begin to question Howard’s sanity and the truth of what really happened above ground.

Kudos to J.J. Abrams and Trachtenberg for crafting a simplistic film around a very intriguing idea. Taking place mostly in an underground, three room bunker, 10 Cloverfield Lane relies less on visuals and more on gripping performances. It helps when you have someone like John Goodman. His performance as Howard steals the show and it’s what makes the movie feel as eerie and as suspenseful as it wants to be. Winstead and Gallagher Jr. are certainly no slouches either, both managing to pull their emotional weight and play well off of Goodman’s magnetic performance.

If there’s fault to be found with the movie, it is that it lasts too long. No, it isn’t a lengthy movie, and it actually felt relatively shorter than its listed 103 minute run time. But there’s a point in the film, that I won’t spoil, where the movie could’ve ended and savored its perfect tone. Instead, it goes on for about 15 more minutes and turns into a movie of an entirely different genre even though the plot twist has clearly been realized. And that’s a shame, because those last few minutes make you leave talking about the unusual and unfitting climax instead of about the exhilarating performances.