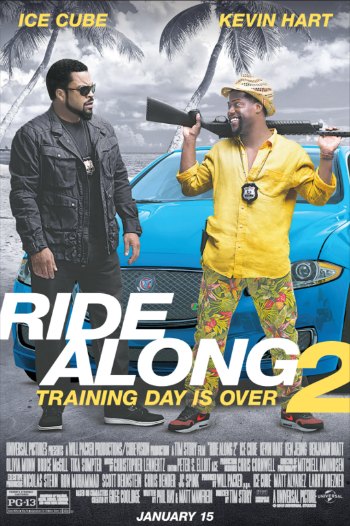 I didn’t like the first Ride Along. In fact, it was one of my least favorite films of 2014. The premise was funny enough, but the actual movie itself seemed to rely on the same gimmicks over and over again. So, needless to say, I wasn’t too enthusiastic about the idea of a sequel. But I decided to keep an open mind going into Ride Along 2, thinking “Hey, there’s nowhere to go, but up.”

The movie picks up with rookie cop Ben Barber’s (Kevin Hart) continuous efforts to gain the approval of his soon to be brother-in-law, Detective James Payton (Ice Cube). In another attempt to scare him out of law enforcement, Payton brings Ben on an undercover investigation in Miami. There they team up with Homicide Detective, Maya Cruz (Olivia Munn), and a hacker (Ken Jeong) to try and expose a wealthy crime lord (Benjamin Bratt).

The plot being generic shouldn’t be a big issue for comedies, because we aren’t watching the movie for an intricate story, we’re watching for laughs. The problem is, Ride Along 2 just isn’t funny and like its predecessor, relies on the same tricks to try and justify its existence. Kevin Hart does his physical comedy routine and it makes for a few snickers, but never anything above that. And he gets absolutely no help from his co-stars. Ice Cube just grimaces the entire film, while Olivia Munn seems to be hell bent on giving as dry a performance as possible. As for Ken Jeong, I honestly haven’t found him funny since the first Hangover movie, so his lousy presence isn’t anything surprising.

I’ve always found Kevin Hart’s stand-up to be hilarious, but the antics of his movie characters are getting old. If seeing a short, loud, man-child fall down or scream over and over again is worthy of an hour and a half of your time, then by all means enjoy Ride Along 2. But I can’t help but hold my comedies to a higher standard. Good comedies are the ones where you can still laugh about certain moments long after you’ve seen the movie. A year from now, if I ask someone to name a funny part from either Ride Along movie (that isn’t in the trailers), I’ll be surprised if they don’t draw a blank.