I am a huge fan of James Dashner’s young adult Maze Runner book series about a post apocalyptic world ruled by WCKD, an organization using teens to find a cure for a disease that turns people into zombie-like creatures called Cranks. So, before you go any further, you should know that a large part of this review will be from the perspective of someone who will be making comparisons to the source material. But I’ll do my very best to explain why Maze Runner: The Scorch Trials isn’t quite satisfying for fans of the books or casual moviegoers. 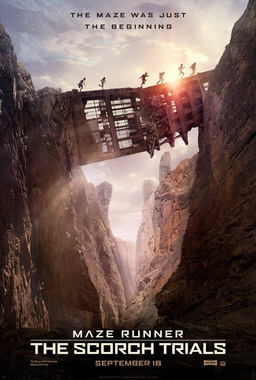 Part two in this series picks up where last September’s Maze Runner left off. Thomas (Dylan O’Brien) and the rest of the teenage survivors from the maze (Ki Hong Lee, Kaya Scodelari, Thomas Brodie-Sangster, Dexter Darden, and Alexander Flores) have been rescued from WCKD and whisked away to a remote facility headed by a man named Janson (Aidan Gillen). There they meet survivors from other mazes, including a mysterious boy named Aris (Jacob Lofland). It doesn’t take long for Thomas to realize that things still aren’t what they seem, and soon he and his friends find themselves escaping through the harsh Crank infested world known as the scorch, in search of a resistance force that may or may not exist.

If you’ve read the books, then you’ll find that synopsis a bit unfamiliar. That’s because this movie is about as similar to the book as 1993’s Super Mario Bros. was to the video games. Nearly everything about the plot has been reconfigured, which is strange considering the first film stuck relatively close to the source material. This would be okay, if the end result was something better. But it isn’t. Instead of an intriguing Mad Max meets Resident Evil storyline where it feels as if Thomas and his friends are simply stuck in a more complex maze, we get a lengthy, generic film about kids running from zombies to join up with a desert army.

Completely gone, is the sense of intrigue and mystery created from the first book/movie. And there seems to be no real reason for the changes. This film version, which drags on seemingly twenty minutes too long, seems less concise and more confusing than its source material. And despite its length, it still fails to flesh out the majority of its characters.

There are still some positives. Many of the set pieces, especially those set in the scorch, are visually stunning and when the action hits, it is certainly entertaining. There are also a few heartfelt moments, specifically one involving a characters’ death. But the unnecessary revamping of the storyline completely ruins the unique feel of it all. The Maze Runner wasn’t just some teen monster movie, it was a distinctive, mysterious, suspenseful narrative, but its sequel is just one big hollywood cliché. For those casual movie-goers, feel free to watch Scorch Trials or just rent World War Z or 28 Days Later, because those are much more memorable.