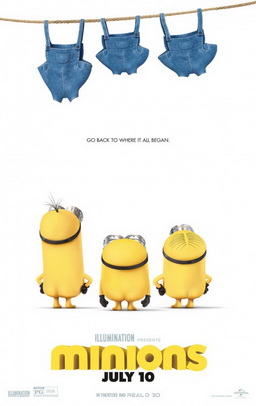 Back in 2010, Despicable Me became a hit among children and adults. And with that, the minions became an overnight sensation. The little yellow, gibberish spouting, characters weren’t the heart and soul of the film or its 2013 sequel, but they certainly were the biggest form of comic relief. So it only made sense for Illumination Pictures to cash in on their popularity with a spinoff/prequel adventure about those spunky critters.

Minions takes place in the 1960’s, as the titular characters search the world for a master to give their henchmen-like lifestyle purpose. Three of them; leader Kevin, goofball Stuart, and childish Bob, head to a Villain convention where they are united with super villainess Scarlett Overkill (Sandra Bullock) and her husband, Herb (Jon Hamm). Together, they plot to steal the crown jewels from London.

If you’ve always found the antics of the minions to be cute and silly then you’ll feel no different watching this film. But, don’t expect a story that is coherent or even as heartfelt as the plots of the two Despicable Me films. With characters like Steve Carell’s Gru relegated to cameos and even Sandra Bullock’s Scarlett Overkill only appearing for about half of the movie, the slapstick goofiness of the minions gets old pretty quickly. Children will enjoy every second of this movie, but adults who were enamored with the quality storytelling of Despicable Me might find themselves nodding off every now and then.

One thought on “Minions Quick Review”