One of my favorite comedies with a predominantly African American cast is 1999’s The Wood starring Omar Epps and Taye Diggs. Few films manage to capture the camaraderie and angst of young black teens growing up together like that film did. Dope is the latest film from Rick Famuyiwa, the same director that brought us that classic film as well as another of my favorites, 2002’s Brown Sugar. 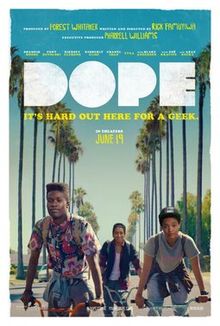 Narrated by producer Forest Whitaker, Dope let’s you know what it is from the start: A teen comedy with something strikingly important to say. The film follows Malcolm (Shameik Moore), a self proclaimed black nerd who idolizes 90’s hip hop culture, makes straight A’s and has dreams of attending Harvard. He plays in a rock band with his two friends; Hispanic goof Jib (Tony Revolori), and lesbian tomboy Diggy (Kiersey Clemons). Together they spend their days running from bullies, avoiding street gangs, and genuinely trying not to circumstantially die in the mean streets of Inglewood, California. After a beautiful girl (Zoe Kravitz) invites Malcolm to a party hosted by a notorious drug dealer (rapper A$ap Rocky), life starts to get crazy for the three teens. Caught up in a drug mix up, they are forced to figure out what to do with a backpack full of “molly”.

At times, the film is as chaotic as someone actually on drugs, but solid structuring helps navigate the often incoherent plot. A strong soundtrack, fused with some of the best hip hop songs of the late 80’s and 90’s, also helps establish a vibe that is similar to Famuyiwa’s past films. But the element that makes the film solid from start to finish is without a doubt the cast. Led by a strong performance from Shameik Moore, one that is reminiscent of Sean Nelson’s in The Wood, this film shines on the charisma of its young actors. The greatest comedies have clever jokes, great delivery, and entertaining slapstick. Moore excels in all three as does the vast majority of the rest of the cast.

But Dope is also more than just a comedy. Wedged between the comedic exterior is a film about the struggle and desperation any young teen has when trying to find himself or escape a negative environment. One scene in particular, involving a gun, hammers this point home in beautifully dramatic fashion. The film also manages to include some very poignant commentary on the nature of race, although this aspect isn’t as strongly executed.

Dope is dope, in every sense of the word. And it is one of the best comedies I’ve seen in quite a while. It may get lengthy, and at times the plot will be as difficult to comprehend as a psychological thriller, but you’ll laugh out loud and also be enlightened several times before the credits role.

One thought on “DOPE (Full Review)”