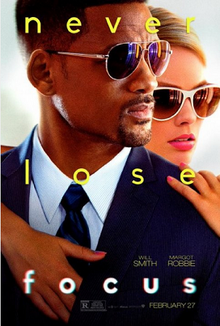 Apparently, it’s very important not to lose focus when you’re a con artist. It’s also probably a good idea not to lose focus when making a movie about con artists. Unfortunately, Focus, written and directed by Glenn Ficarra and John Requa is actually a movie that fails to do what its title suggests… which is disappointing, because there are plenty of resources at their fingertips, such as a fine cast and a soothing soundtrack, to make something fantastic.

When things are clicking in Focus, the movie is pretty riveting. You’ll have to suspend a pretty heavy portion of your common sense to believe some of the jobs pulled, but the same can be said for any heist film. But, as mentioned above, the movie seems to veer off in its second half. Instead of tense scenes involving high stakes gambling that take place in the first hour, the movie chooses to focus more on the sexual tension between its two leads.

Will Smith stars as Nicky Spurgeon a.k.a “Mellow”, a veteran con man who leads an entire legion of expert con artists during Super Bowl weekend in New Orleans. After an attempt to con him fails, rookie Jess Barrett (Margot Robbie) gets taken in under Nicky’s wing where she eventually falls for him. Together they have solid chemistry which is important for a movie that promotes itself like a high stakes heist film, but is actually more of a romantic drama. Sure, there’s still a con involved, but it’s buried so deep by a quasi-love story that it kind of feels like you’re watching a completely different movie from what it began as.

The romantic aspect of the film isn’t bad, but it sure isn’t as interesting as the moments where we are trying to guess whether or not Will Smith is pulling a con. Thus, instead of an exciting thriller with a strong romantic subplot, we’re left with a decent, but forgettable movie about a girl that wants to trust a guy, but a guy who can’t stop lying. Maybe, convincing us that this would be a movie about con-artists was the real con.

One thought on “Focus (Full Review)”