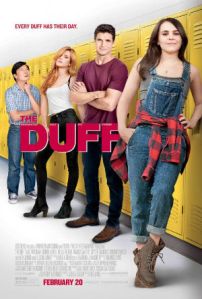 THE DUFF Every generation deserves at least one good teen movie. Now those “loveable” millennials have theirs in this film about a young girl (Mae Whitman) who discovers that she is the Designated Ugly/Fat Friend to her two attractive and popular high school buddies. With the help of her Jock next door neighbor (Robbie Amell), she sets out to shake her label and fend off her cyber-bully nemesis (Bella Thorne) in time to woo her class crush (Nick Eversman).

This movie isn’t quite funny enough to be Mean Girls or Can’t Hardly Wait, due in large part to Bella Thorne’s flat performance as the primary antagonist. She’s like a thrift shop version of Rachel McAdams’ Regina George. Ken Jeong’s annoying portrayal of a high school teacher could’ve also been left out. But, the movie does strike the necessary chords to be memorable. Relative newcomer Mae Whitman is magnetic in the lead role and her back and forth chemistry with Robbie Amell is undeniably refreshing. So, while The DUFF may not be a classic, it certainly deserves credit for being witty and for managing to effectively refresh the genre for the newest generation of teenage moviegoers. FINAL GRADE: B+

STILL ALICE Julianne Moore stars as a Linguistics professor and mother of three (Kate Bosworth, Hunter Parrish, and Kristen Stewart) going through early-onset Alzheimer’s. Alec Baldwin co-stars as her fellow collegiate professor husband trying to keep her from losing herself as she battles this devastating, memory effecting illness. From the start, it is easy to see why Moore won the Oscar for Best Actress as she gives an emotionally powerful performance that guides what could’ve been a bland narrative.

Kristen Stewart (yes, Twilight Kristen Stewart) is the obvious weak link here. She isn’t quite terrible throughout, but any time she is asked to monologue or show more than the average dose of emotional depth, she absolutely flounders and kills the vibe. Ironically, her character is an aspiring actress. But luckily for us, Julianne Moore’s Alice Howland is our focal point and she gives a performance that may just leave you in tears of sorrow and joy as she shows how one can confront a debilitating disease with dignity and love. FINAL GRADE: B

SPONGEBOB: SPONGE OUT OF WATER Nickelodeon’s longest running cartoon character returns to the big screen for his newest dizzying adventure. This time everyone’s favorite whimsical sponge must team up with his arch-rival to bring back the missing recipe for Bikini Bottom’s most coveted fast food sandwich before the town falls deeper into chaos. Spongebob’s mission takes him on a journey through time and even above water to challenge Antonio Banderas as the new villain, Burger Beard.

It should go without saying, that if you don’t like Spongebob, this movie will be the most annoying two hours of your life. But if you’re familiar with the show, and how it can borderline on inappropriate for young ages in the same vein of Ren and Stimpy, then there will be plenty of tongue and cheek laughs. Don’t expect the story to be nearly as coherent as my plot summary and if you’re prepping to see CGI superhero action like what’s promised on the poster and in the trailer, expect disappointment there as well. The vast majority of the film takes place in the usual animated setting of the TV show. I am a quasi-fan of Spongebob fan, so I found it watchable enough, but parents of young children should beware. FINAL GRADE: B-