Thanks to Harry Potter and Twilight, we can get used to having the final installment of every young adult book being split into two separate films. While the studios justify this by claiming they want to do the finale justice, it’s more about milking out every precious cent from these cash cow franchises. Mockingjay, the third and final installment in Suzanne Collins’ young adult book series, is the newest victim of this trend. And just like all of the part 1’s before it, it’s all about the build up. 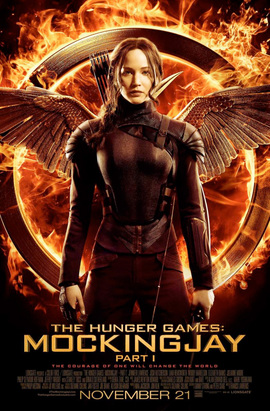 If you need me to explain that the story follows Katniss Everdeen (Jennifer Lawrence) or what the Hunger Games were, then there’s no need to read this review or watch this movie. You have catching up to do. Mockingjay Part 1 picks up where the previous film left off. After being rescued from the games by former head gamemaker, Plutarch Heavensbee (the late Phillip Seymour Hoffman), Katniss and refugees from District 12 are taken to District 13, a military district once thought to be destroyed decades ago. There, they meet President Coin (Julianne Moore) and Commander Boggs (Mahershala Ali) who plan on using Katniss’ image to ignite the already rising tides of rebellion. The only problem is that Katniss can’t take her attention off of Peeta (Josh Hutcherson) who is President Snow (Donald Sutherland)’s prisoner and weapon against the rebels. Other familiar faces return, including Katniss’ snarky mentor Haymitch (Woody Harrelson), her best friend Gale (Liam Hemsworth), former Hunger Game victors Finnick (Sam Claflin) and Beetee (Jeffrey Wright), and former Capitol escort Effie Trinket (Elizabeth Banks).

I have read all of the Hunger Games books, but just as I did with my Catching Fire review a year ago, I’ll try and do my best to judge this movie as a separate entity. And as a film, it starts off feeling like what it is; half of a whole that was meant to be a half. We spend the better part of the first hour watching Jennifer Lawrence ironically doing her best job to be a bad actor as Katniss is prepped and filmed in hokey propaganda adds. These moments don’t nearly equate to the riveting build up of the games in the previous films. Katniss is also at her whiniest and most melodramatic. We realize these are devastating times, but does she have to act like such a brat towards the people who are clearly trying to help?

But like the first two films, once the action comes, it is entertaining. This time around though, these enthralling moments come from every character that isn’t Katniss. We’ve known that these are trying times in the country of Panem throughout the series, but for the first time, we get more than just glimpses of riots and protests. We get dam bombings, air strikes, and violent resistance from un-armored civilians willing to die for their cause. For the first time in the Hunger Games series, the action feels more real and much more powerful.

The early moments might seem dull and dreary, making Mockingjay Part 1 likely the weakest link in the chain, but there is still plenty to like. Harrelson is still a breath of fresh air anytime he’s on screen and Elizabeth Banks adds welcomed warmth (Effie only appeared in the book at the very end). Even Gale is much more likable than in previous films thanks to a noble performance from Liam Hemsworth. Fans of the book will also be pleased with casting of the numerous new characters. And if you’re one of those people who loved Hunger Games for the actual action of the games and might dose off once or twice, don’t worry, because the games are just beginning.