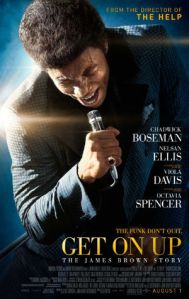 Biographical films are a very delicate genre. Just because you have an interesting figure, doesn’t necessarily mean you’re going to have an interesting film. After all, you’ve seen enough of them to virtually know how things will go (bouts with drug abuse, domestic violence, friendship fallouts, racism, etc.). Thus when it comes to keeping a biopic fresh and interesting, it becomes more about style than content. Luckily for director Tate Taylor (The Help), James Brown has plenty of style. Having a lead actor who can do the iconic singer justice certainly doesn’t hurt either.

That lead actor is Chadwick Boseman, who got his big break playing Jackie Robinson in last year’s biopic, 42. But playing James Brown is a completely different task than playing the mild mannered baseball legend. In this role, Boseman is really able to show off his talent. He may not physically look like or sing like James Brown (the performances are clearly voiceovers), but the speaking voice, the swagger, and the iconic dance moves are spot on from start to finish. Simply put, it is impossible to not find Boseman’s portrayal infectious if you are a fan of “the Godfather of Soul”.

But as I said earlier, biopics are more about style than substance. And while one could argue that it’s difficult to make a boring movie about James Brown, it is never difficult to make a movie excessive. Get On Up comes close. With a two and a half our run time, the movie feels way too long, especially considering the fact that the film doesn’t even spend a ton of time exploring Brown’s flawed later years. As for the film’s nonlinear style of storytelling, it has its positives (we don’t have to wait an hour to get through James Brown’s rags to riches backstory) and negatives (It makes the story feel muttered and chaotic).

Ultimately, the movie still has Boseman, who is able to offset the manic narrative with an awe inspiring performance. And even though the movie flows like James Brown’s hallucinations more than the typical biopic, it certainly can’t be called dull. When it’s all said and done, you’ll get what you come for; great music, greater performances, and a glimpse into the life of the legendary hardest working man in show business.

FINAL GRADE: B, Good movie. See it when you can. But no rush.

One thought on “Get On Up Review”