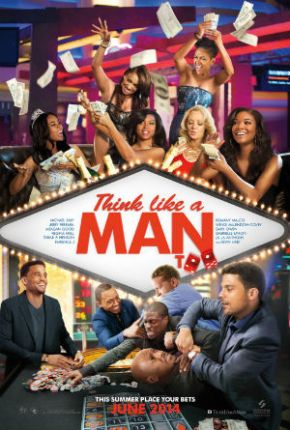 Do I even need to say it? *Sigh* I think I do…. *Stands on soap box and clears throat*. EVERY MOVIE DOES NOT NEED OR WARRANT A SEQUEL!!! Ok, now that I’ve gotten that off of my chest, I feel like I can proceed forward with my actual review of Think Like A Man Too.

Based on Steve Harvey’s book Act Like A Lady, Think Like A Man, the first movie was a romantic comedy built around the archetypal personalities of men and women in relationships. Comedian Kevin Hart, as the happily divorced comic relief, served as narrator in a story about: The Mama’s Boy (Terrence J) and the single mom (Regina Hall), the dreamer (Michael Ealy) and the Independent woman (Taraji Henson), the player (Romany Malco) and the wholesome girl (Meagan Good), and lastly the man-child (Jerry Ferrera) and the woman who wants him to grow up (Gabrielle Union). Despite some flawed logic and falling into the usual romantic comedy clichés, the first movie was actually comically enjoying.

This time around the whole gang and a few new faces, some necessary and some not, head to Las Vegas for the mama’s boy and single mom’s wedding. Antics ensue when the Best Man, Kevin Hart’s Cedric, goes over the top to make bachelor party night a success. Meanwhile the girls just want to get away from the overbearing mother-in-law to be (Jenifer Lewis).

It isn’t that Think Like A Man Too is a bad movie. That isn’t the case at all. Kevin Hart is still funny, perhaps even more so than in his previous big screen outings this year. The problem is that not an ounce of it is necessary. None of the characters go through anything that isn’t just an extension of the same problems they had in the previous movie. And for a movie set in Las Vegas, the plot sure is bland and uneven. Maybe it’s just me setting the bar too high, after all, every unnecessary sequel can’t be as great as Best Man Holiday. Still, I can’t help feeling like this was something I could’ve waited for on Red Box.

2 thoughts on “Think Like A Man Too… Full Review”