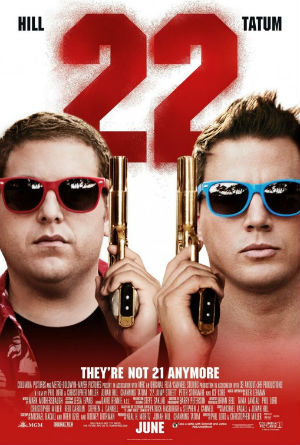 There are different ways a sequel can fail. Having a less challenging plot, a weaker cast, or just flat out going overkill on a premise that never was meant for a sequel (*cough* Hangover 2 & 3). If ever there were a movie that understands these potential pitfalls, it is 22 Jump Street.

From the jump (no pun intended), Jump Street knows exactly what it is. In fact, it might just be the most self referential, tongue and cheek comedy I’ve ever seen. Literally at the beginning of the movie, the police captain tells Schmidt (Jonah Hill) and Jenko (Channing Tatum) to do the exact same thing as last time. So… that’s pretty much what they do, only instead of infiltrating a high school to find drugs, this time they’re infiltrating a college campus.

Though it still manages to be funny, it’s debatable whether this installment is an upgrade from the first. The supporting cast is a bit forgettable. The exception is Jillian Bell as the annoying roommate to Hill’s college girlfriend (Amber Stevens). And as comedies go, some of the bromance jokes can get stale. We get it, Tatum and Hill’s relationship is borderline homosexual. It isn’t necessary to keep acknowledging that in every scene. But for every misfire, Tatum, Hill and Ice Cube are there to make up for it with a ton of laugh out loud moments. The last half of the movie is packed full of hilarious moments.

Just like with the first movie, the sequel is a mixture of Buddy Cop movie, spoof comedy, and romantic comedy. Ironically enough, it manages to avoid the predictability of those genres by acknowledging them before hand.  In fact, there is a point in the movie where the entire plot is rundown for us, clichés and all. And the credits, chock full of cameos, pokes fun at a possible series franchise. It always helps when you can laugh at yourself. And it certainly makes it more fun for the audience.