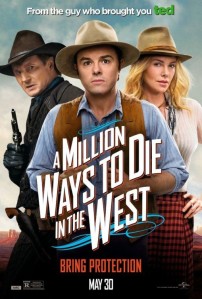 Seth McFarlane currently stands as the king of cartoon comedy. Family Guy and American Dad are two of the funniest cartoons on television and if you watch those shows, you know McFarlane’s style of comedy. In 2012, McFarlane made his first soiree onto the big screen with the moderately funny Ted. This time around, he sets his comedic sights on the old west.

Like with Ted, McFarlane again directs and stars in the film. But there is one thing about this film that sets it apart from anything McFarlane has ever done on TV or film. Instead of voicing a prominent character like Ted, Peter Griffin, or Stan Smith, this time McFarlane himself is on screen as the lead role. Based on this performance, he should probably stick to voice acting. It’s not that he isn’t funny as an actor, it’s just that he’s more awkward than funny. He doesn’t look like he is enjoying himself as sheep farmer Albert Stark. And as such, it just makes everything feel less humorous.

The plot of the movie involves Albert Stark learning how to be a gunman from an outlaw’s wife (Charlize Theron) in order to win back his ex-girlfriend (Amanda Seyfried) from a rich mustache groomer (Neil Patrick Harris). Giovanni Ribisi plays Stark’s best friend, a virgin who is in a serious relationship with a prostitute (Sarah Silverman), and Liam Neeson plays the film’s outlaw villain. Neil Patrick Harris is probably the funniest character in the movie although McFarlane and Theron should get some credit for having decent on screen chemistry.

McFarlane’s shortcomings as an actor would be forgivable if the movie were funnier. But it just isn’t. You’ll chuckle every now and then, but even if you are a fan of the pop culture references, non-sequiturs, and potty humor that have come to make McFarlane famous, you won’t find enough here to make this movie interesting. I don’t get bored at the movies much, especially not during comedies, but I admittedly couldn’t wait for this one to be over.

FINAL GRADE: D+ Catch it on TV in a few years or don’t bother